What does your suburb choice say about your age? 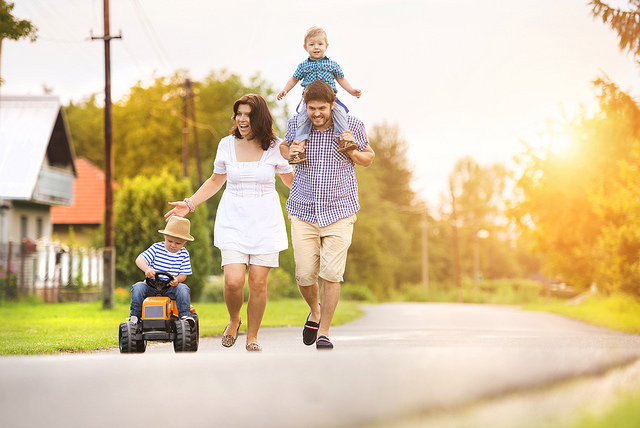 What are some of the factors that influence your choice of living in one area over another?

Lendi surveyed 1,000 Australians to uncover the most important suburb factors people consider when choosing to buy property. We surveyed different age groups to find out if Generation Y (ages 18-34) think differently to their parents and grandparents.

The results found that when you’re in your early 30s, you may be less likely to think about the availability of medical services in a suburb as opposed to someone in their late 60s. Likewise, those living in retirement villages are possibly less likely to seek out hot yoga studios and cafes that serve turmeric lattes.

However, we found that there are 6 common themes across all age groups that influence decisions to reside in one place over another.

Factors that make a desirable suburb 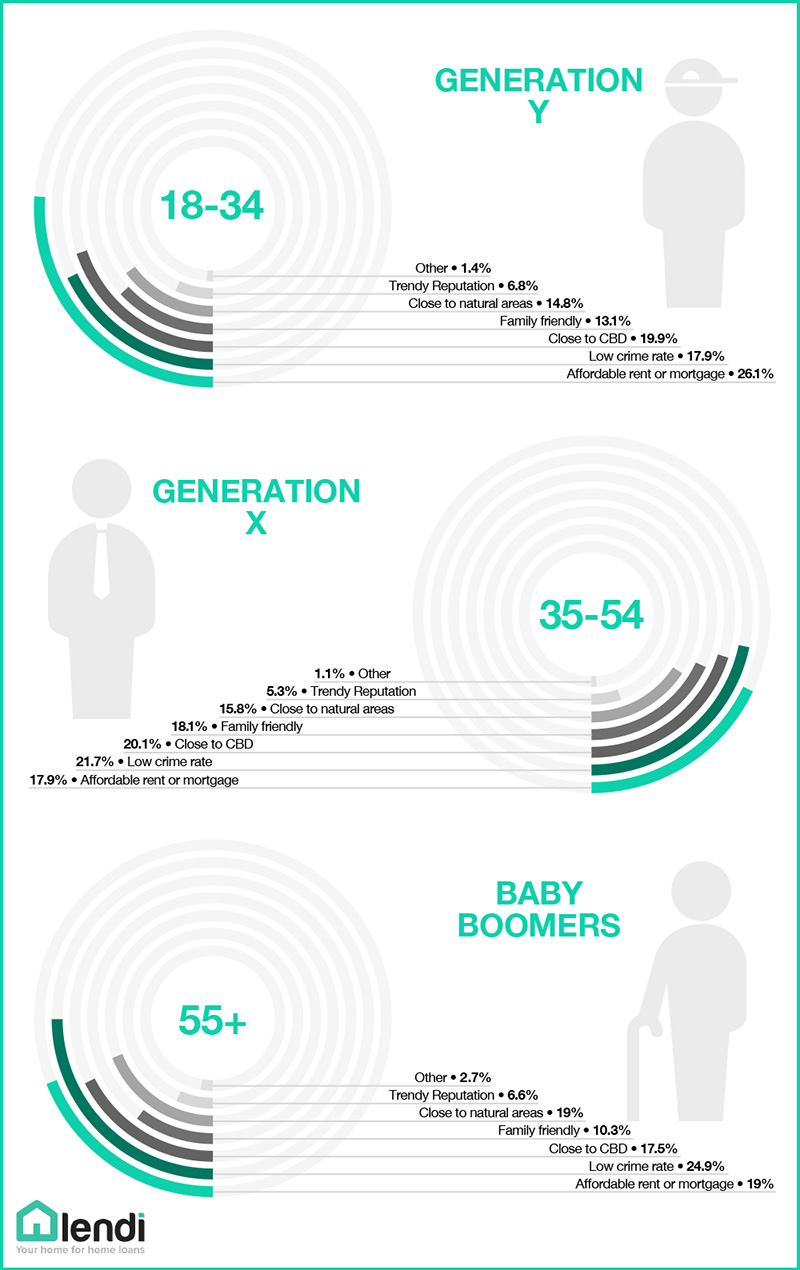 Gen Y prefer housing affordability over proximity to the CBD

It probably comes as no surprise that price is one of the biggest factors for every age group when deciding on a location. While one in five Generation Y residents would rather live near the city, a quarter prioritise affordable rent and mortgages which are typically located further from the CBD. Generation Y are willing to commute further than Gen X and Baby Boomers and go the extra mile to save on rent or mortgage repayments.

Baby Boomers value living in areas with low crime rates above everything else. Nearly a quarter (24.9%) of those aged 55 and over prefer to live in a safe suburb compared to 19% who would prioritise paying less in rent or mortgage repayments.

This suggests they are more likely to pay a premium to live in safer suburbs if their financial circumstances allow them. Generation Y were the least concerned about living in low crime rate areas, particularly those living in Tasmania. 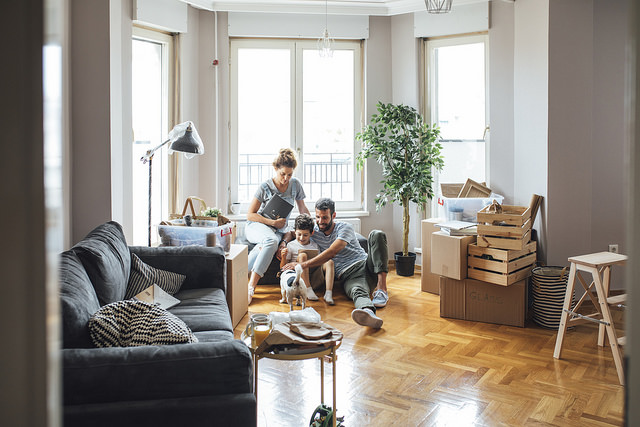 Baby Boomers are opting to live near the CBD

The desire to live closer to the CBD is shared across all age groups. While Baby Boomers may have the option to retire outside of cities, they are increasingly opting to stay living in the centre of things. The proportion of Baby Boomers who indicated living near the city as their main driving factor (17.5%) is similar to those of Gen X (19.9%) and Gen Y (20.1%).

As the major business centres of Australia, 21.6% of Sydney and 22% of Melbourne residents consider proximity to the CBD a major deciding factor in choosing where to live. While those in Perth (14.4%) and Brisbane (16.2%) are not as concerned with living as close to the hustle and bustle, perhaps opting for more relaxing lifestyles.

Although Baby Boomers value proximity to the CBD, they also want to be close to nature. Almost 20% of Baby Boomers want to live in areas that are close to nature such as beaches or hinterland. Many Australians want to sell up their family homes after they retire for a sea change or move to the country. Western Australians (20%) and Tasmanians (18.7%) value proximity to these natural areas the most over other states and territories, for example only 12.4% of South Australians surveyed would prioritise living nearer natural areas. 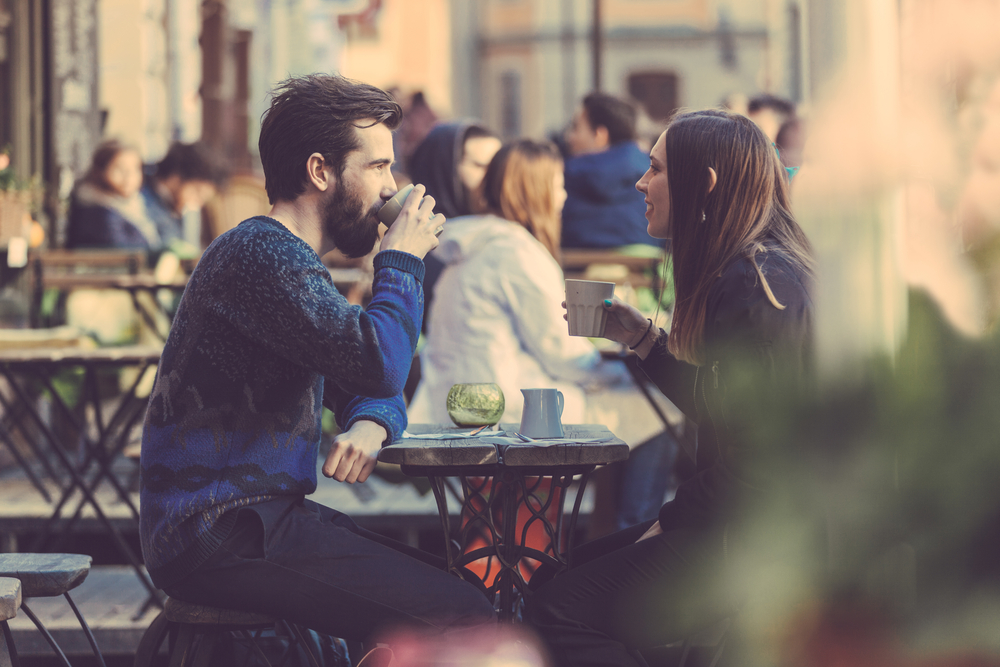 Almost 20% of Generation X prefer to seek out family friendly areas presumably while raising their children. Baby Boomers are the least concerned about this (10.3%) perhaps because their children have already grown and left home. While only 13.1% of Generation Y consider family friendly neighbourhoods to be a deciding factor in choosing where to live.

As people are opting to have fewer children, some people in their early 30s may find themselves in a transition phase of living in the city and considering moving to the suburbs. However, there is a trend towards more people raising their children in cities with high demand for inner-city education institutions.

Gen Y and Baby Boomers agree when it comes to trendiness

While the trendiness of a suburb is not as critical as others, it is still an interesting observation. With increased gentrification occurring in major cities, property values have increased as a result. This is not just for Generation Y (6.8%), but their older counterparts the Baby Boomers (6.6%) are seeing the value in hipster cafes and boutique shopping districts on their doorstep. This demand is higher than average in Victoria (9.4%) as opposed to Queensland (3.3%).

We've got answers! Choose a time to chat with a Home Loan Specialist and get free expert advice.

# Quoted rate applies only to PAYG loans with LVR of 80% or less with security in non-remote areas. All applications are subject to assessment and lender approval.

Lendi is a privately owned and operated Australian business. Our mission is to change the way Australians get home loans by providing a faster, smarter and more secure home loan experience designed around the customer’s convenience and needs. Although Lendi compares over 1600 products (2,500+ products including feature and pricing variations) from more than 25 lenders, we don't cover the whole market or compare all features and there may be other features or options available to you. Lendi Group Pty Ltd, which is the ultimate holding company of the Aussie and Lendi businesses is owned by numerous shareholders including; banks such as CBA, 1835i (ANZ’s external venture capital partner) and Macquarie Bank, the Lendi founders and employees, and a number of Australian institutional investors and sophisticated investors including UniSuper.

IMPORTANT INFORMATION: Loan terms of between 1 Year and 40 Years are available subject to lender and credit criteria. Maximum comparison rate will not exceed 14.99% (see comparison rate warning above). Any calculations or estimated savings do not constitute an offer of credit or a credit quote and are only an estimate of what you may be able to achieve based on the accuracy of the information provided. It doesn't take into account any product features or any applicable fees. Our lending criteria and the basis upon which we assess what you can afford may change at any time without notice. Savings shown are based on user inputted data and a loan term of 30 years. All applications for credit are subject to lender credit approval criteria. Top rates include lenders who are on our panel and are then defined by the circumstances provided by the borrower.

The Lendi Group Pty Ltd, which is the ultimate holding company of the Aussie and Lendi businesses is owned by numerous shareholders including; banks such as CBA, 1835i (ANZ’s external venture capital partner) and Macquarie Bank, the Lendi founders and employees, and a number of Australian institutional investors and sophisticated investors including UniSuper.

Made with love at Circular Quay in Sydney, Australia. © 2022. All rights reserved.