How happy are Australians really? 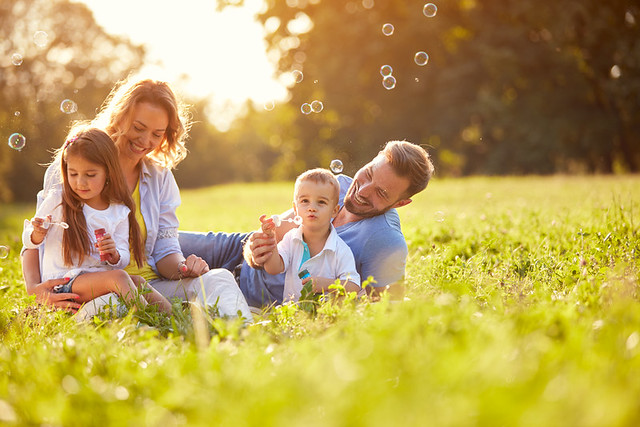 It was recently revealed in the World Happiness Report 2019 that Australia has slipped from the ranks of the top 10 happiest countries. So we set out to investigate why and even conducted a study of our own to see if we could pinpoint which states Australians were the most and least happy in (spoiler! South Australians are 8% less happy than the national average). 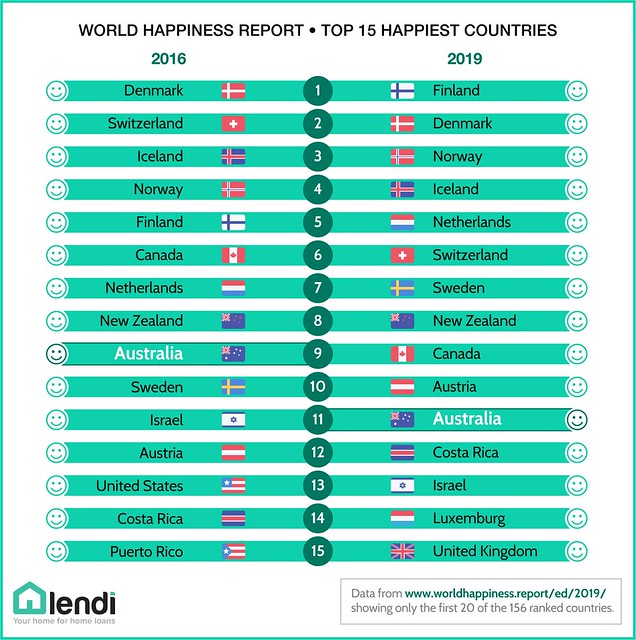 There are several ways in which happiness can be measured and in reality it’s a very tricky thing to measure since it is so subjective and individual to each person. We take a look at some of the most popular ways it’s measured and how Australia fares in each one.

Every couple of years the United Nations releases a new publication of the World Happiness Report. The report uses pooled data from one question in the Gallup World Poll surveys. The question asks respondents to imagine a ladder with steps numbered from zero at the bottom to 10 at the top. The top of the ladder represents the best possible life for the person and the bottom of the ladder represents the worst possible life for the person. They are asked “On which step of the ladder would you say you personally feel you stand at this time?” these answers are then collated to give a score and rank to each nation.

In the 2016 edition of the World Happiness Report (based on survey results from 2013-2015) Australia ranked as the ninth happiest country but dropped 2 spots to number 11 in the 2019 edition. 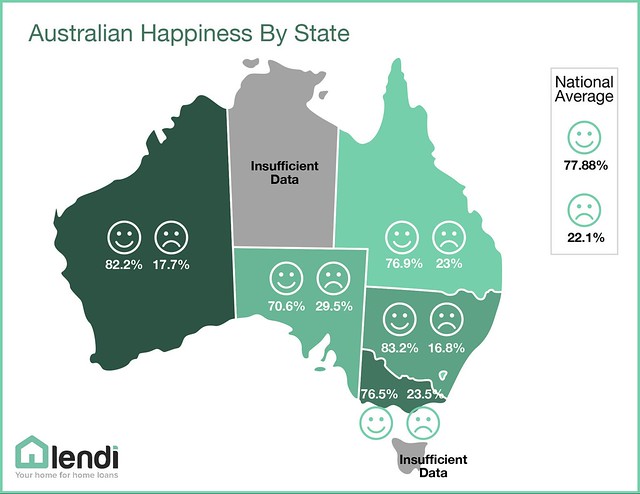 In March 2019 we conducted our own survey of national happiness. Instead of using the Cantril ladder question that the World Happiness Report draws from, we chose a self reported life satisfaction question. This involved asking a portion of the Australian population the simple question “Overall, Would you say you are? Very Happy, Quite Happy, Not Very Happy, Not At All Happy”. Using this question we received 1,104 results from residents all across Australia.

The good news is, we discovered a heartening 79.4% of Australians surveyed are either quite happy or very happy leaving just 20.6% of the population feeling glum. When we drilled down per state we found that New South Wales and Western Australia are our happiest states with 83.2% either quite happy or very happy in NSW and 82.2% in WA. South Australia came out as the most unhappy state with 29.5% of respondents answering either not very happy or not at all happy.

What makes a happy nation? 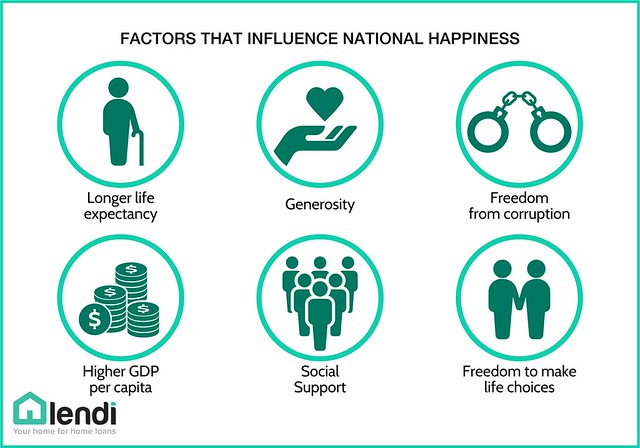 The six factors below are believed by **many to be the most important contributors to a happy country.

In these six factors Australia does quite well. The national life expectancy is around 83 years. This is 3 years higher than the OECD average of 80 years and among the longest life expectancies in the world. Social support is tricky to measure, but according to the OECD 94% of people in Australia believe that they know someone they could rely on in time of need. Similarly, the link between generosity and happiness, happier people tend to help others and volunteer more and are also more likely to donate money to charity.

Personal freedoms are hugely important to happiness as they are tied to the actualisation of hopes and dreams. Australia recently voted in favour of gay marriage and this can be one example of good personal freedoms. Being an active democracy puts Australia in good stead. 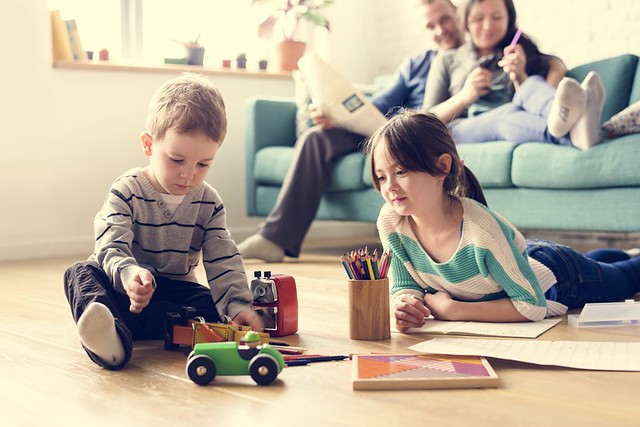 Money has a complicated relationship with happiness, it does help to a certain extent by increasing higher living standards such as the ability to afford better housing. According to the OECD “living in satisfactory housing conditions is one of the most important aspects of people's lives”. Housing increases living standards and mental health because it provides basic needs such as safety, shelter, personal space, privacy and a home to raise a family in.

Once basic needs are accounted for and living standards are high, it’s more important what you spend your money on rather than how much of it you have. Spending money on helping others is highly correlated with happiness but accumulation of material goods is not.

In Australia, the average household net-adjusted disposable income per capita is AUD$46, 879 a year. There is a considerable gap between the richest and poorest – the top 20% of the population earn more than five times as much as the bottom 20% and this is not a good sign of a happy nation; high rates of inequality are not good for anyone.

Overall when we take into account the many ways to measure happiness it actually looks like Australia isn't doing too bad after all! We have statistics among the top in the world for indicators of a ‘happy country’, with high life expectancy, GDP per capita and general quality of life. We are lucky to have good levels of personal freedoms, social support and a stable government (even if we might forget who the current prime minister is on occasion!).

If living in satisfactory housing conditions is “one of the most important aspects of people's lives” (OECD) then we certainly have that nailed. Very close to all Australian’s homes have basic amenities of bathrooms, water and power, and plenty of space to enjoy at an average population density of 3.1 people per square kilometre.

While in many countries owning your own home is something only the wealthy can dream of, in Australia it is within the grasp of many people to own their own home. For now it appears the Australian dream of home ownership lives on and quite possibly contributes to the overall happiness of our nation. Does your home contribute to your happiness?

**The Country rankings in the World Happiness Report 2019 use data that comes from the Gallup World Poll. However, the report also notes the values for each of six factors - levels of GDP, life expectancy, generosity, social support, freedom, and corruption - that are believed to contribute to making life evaluations higher in each country. These factors have no impact on the total score reported for each country by the world happiness report but instead are an attempt to explain why some countries may rank higher than others in the report.

How much could you save with a lower interest rate?

Which rate is right for you? Let us do the hard work.

Our Home Loan Specialists are here to help you choose the right loan. We're happy to help you. Get free home loan advice by scheduling a callback with one of our experts. 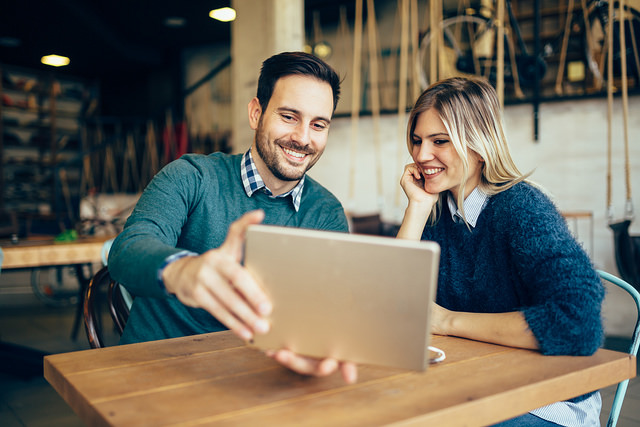 Lendi is the trading name of Lendi Pty Ltd (ACN 611 161 856, Credit Representative 518849), a related body corporate of Auscred Services Pty Ltd (ACN 164 638 171, Australian Credit Licence 442372). We will never sell your email address to any third party or send you nasty spam, promise.
Lendi is a privately owned and operated Aussie business. Our mission is to provide Aussies with the right experience when choosing a home loan from our panel of lenders including ClickLoans, a related body corporate of Auscred Services. Although Lendi compares over 1600 products from over 35 lenders, we don't cover the whole market or compare all features and there may be other features or options available to you. While Lendi is 40% owned by founders and employees, we have also been supported by some great minority shareholders including Bailador, Macquarie Bank Ltd and a number of Australian sophisticated investors. We have an independent and founder led board.
WARNING: This comparison rate is true only for the example given and may not include all fees and charges. Different terms, fees or other loan amounts might result in a different comparison rate. The comparison rates are based on a loan amount of $150,000 over a loan term of 25 years.
EXAMPLE: This example is current as at 20th October 2016. A Click Loans Online Principal and Interest Loan of $150,000 over 25 years has monthly repayments of $767. This is calculated based on the interest rate of 3.69%, comparison rate of 3.69%, upfront fees of $0 and annual fees of $0.
IMPORTANT INFORMATION: Loan terms of between 1 Year and 40 Years are available subject to lender and credit criteria. Maximum comparison rate will not exceed 14.99% (see comparison rate warning above). Any calculations or estimated savings do not constitute an offer of credit or a credit quote and are only an estimate of what you may be able to achieve based on the accuracy of the information provided. It doesn't take into account any product features or any applicable fees. Our lending criteria and the basis upon which we assess what you can afford may change at any time without notice. Savings shown are based on user inputted data and a loan term of 30 years. All applications for credit are subject to lender credit approval criteria.
Made with love at Circular Quay in Sydney, Australia. © 2020. All rights reserved.